It has been some time since this blog has had a post published, mostly because sitting on the other side of the table took its toll on personal sharing. In the past few months, my time was divided between making sure I’m well (essential before we embark on anything), those PBL courses I adore and the organizing of events for the Greek ELT community – so the chance of presenting one of the projects at an event I’d had no part in the setting of was remarkably refreshing and simultaneously intimidating. Do others feel like this, I wonder. I’m not yet certain how that presentation went since I haven’t had the time to go through my collected data and reflect upon it properly. The immediate feedback has been great, teachers have already got on board and begun working on the EarsPeeled Project, yet I’m not entirely satisfied with myself. I need to reach a new level of balance (Presentation slides here). Thank you to TESOL MTh and the outgoing Board for giving me the opportunity to share at the 25th Jubilee Convention!

Back to the project: Most of the material my groups work on comes from their own interactions, as well as among them and myself. As all good learning stories, this project started from a frustrated student’s comment and the urge of the group to end that frustration. Should we speak in a particular way in order to be understood in our second language? Does it have to do with accent or diction? Do we listen in the same way as we’d like to be listened to? Is this an indication of our competence and knowledge?

I have to (re)state here that our starting point is trust. In order for a project to materialize, we need to feel comfortable with each other in sharing, offering suggestions, giving feedback and working through tasks collectively. In many ways, a project cultivates the above and sets effective learning in motion; in our case, eight fourteen to sixteen-year-olds, who had much more in common than they realized in the beginning, managed to come together and deliver tangible outcomes after almost eight months of designing and collaborating on the project. That particular group had had experience in the task-based approach and, as the questions multiplied and developed in complexity, their previously acquired skills were put to the test so as to make every task meaningful and constructive. Meeting face-to-face once a week and collaborating online in our Google classroom twice more, the group had sufficient time to discuss new ideas, resolve issues and reflect as a team.

The first stage was simpler in devising and implementing, with tasks like:
-students producing written dialogues in a variety of everyday contexts (breakfast at home, getting to school, discussion during intervals, etc), using prompts provided by the group, and progressively touching on subjects where they felt less confident to express themselves
-role-playing (engaging in a variety of activities and dramatization techniques)
-sub-group recording examples of the everyday discussions above and sub-group identifying the context
-assessing products within the group and brainstorming ways to resolve emerging issues and plan further steps

Moving to the second stage came much faster than I expected, mid-way through the second month. I felt apprehensive, I must admit it. My concerns were whether the group had had enough time to experiment with the techniques and tasks, and also whether it was necessary for me to interfere and stall the process. The driving question, however, had already been enriched with emergent follow-ups: “Does what we say depend on who is listening?” , “Should we change our words and tone in order to be understood?”. Seeing how engaged the group was in the new prospects, I decided to risk it and allow things to evolve, which thankfully led to some further intriguing results:
*Re-naming the project: the made-up idiom story
*The PM Board: task pin-board where the week’s team leaders left messages in the phonetic transcript (the group’s effort to make the most of – both printed and online – dictionary use within our project’s framework)
*The teacher infiltration:
1.opportunity for instruction and scaffolding of bottom-up and top-down processes simultaneously
2.initiating ELF attempts (a shout-out and big thank you, here, to https://elfpron.wordpress.com/)
*The decision to take steps out of safety:
1.presenting project tasks at morning school and involving classmates
2. organizing collective book read-aloud sessions for younger learners, peers in language schools and eventually preparing to contribute to LibriVox

We are currently in the third stage of our project, where the focus is on presenting the group’s work in detail through the final product: the Project website. The core group in Athens has been collecting their own and all material from other groups taking part and has been designing the webpage on the Wix platform. It has been a demanding task, as it requires careful planning, clear roles, and efficient time management, but so far it seems the group has got everything under control and will meet the end-of-March deadline.

No matter how many projects we work on, students never cease to amaze me – but more on that in the next post, along with my notes and reflections 🙂 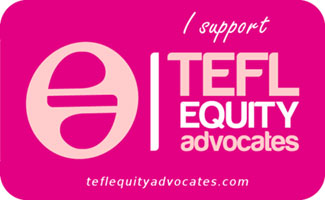 Learning from and with… 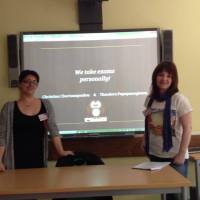 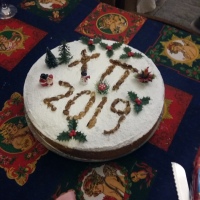 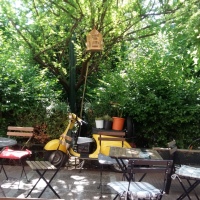